This is a solo project and I chose the theme of falling asleep. How to stimulate people who find it difficult to sleep with a new experience other than watching a series or listening to music? I proposed a solution with an object to place on their bedside table that translates our data into relaxing animations to help them fall asleep. 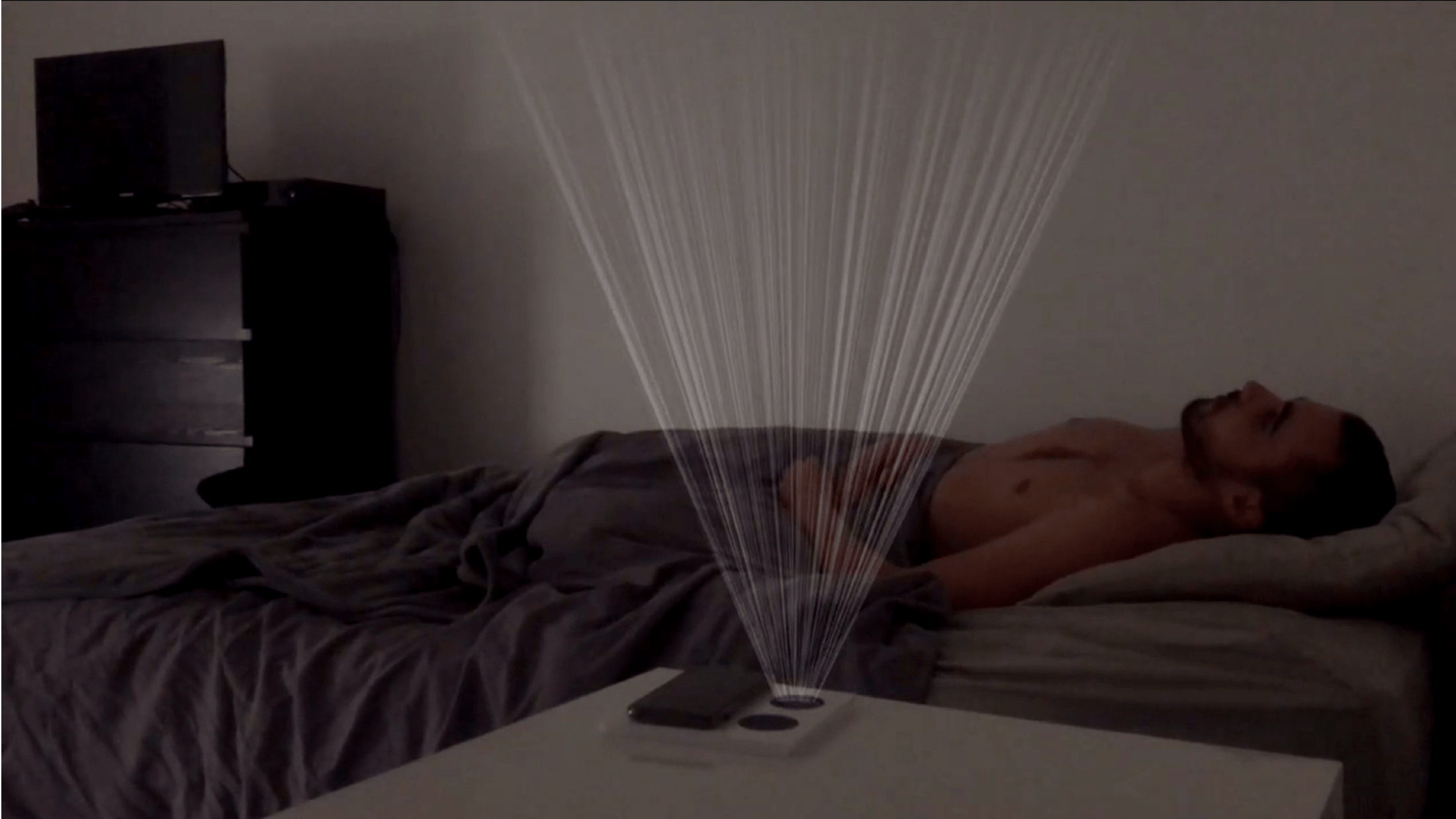 This project lasted 6 months, during my 3rd and last year of my Bachelor's degree in Product Design. The subject being free, its aim was to validate the diploma and to allow us to immerse ourselves in a subject which concerns us and which has an interest from a design point of view.

I chose sleep as a subject, which we are confronted with every day and which for some is a problem. Indeed, in a world where blue light reigns supreme, it is sometimes difficult to detach oneself from the screens, which complicates the time it takes to fall asleep.

"We sleep 1 hour and a half less than we did 50 years ago. "
INSREM - French National Institute of Health and Medical Research 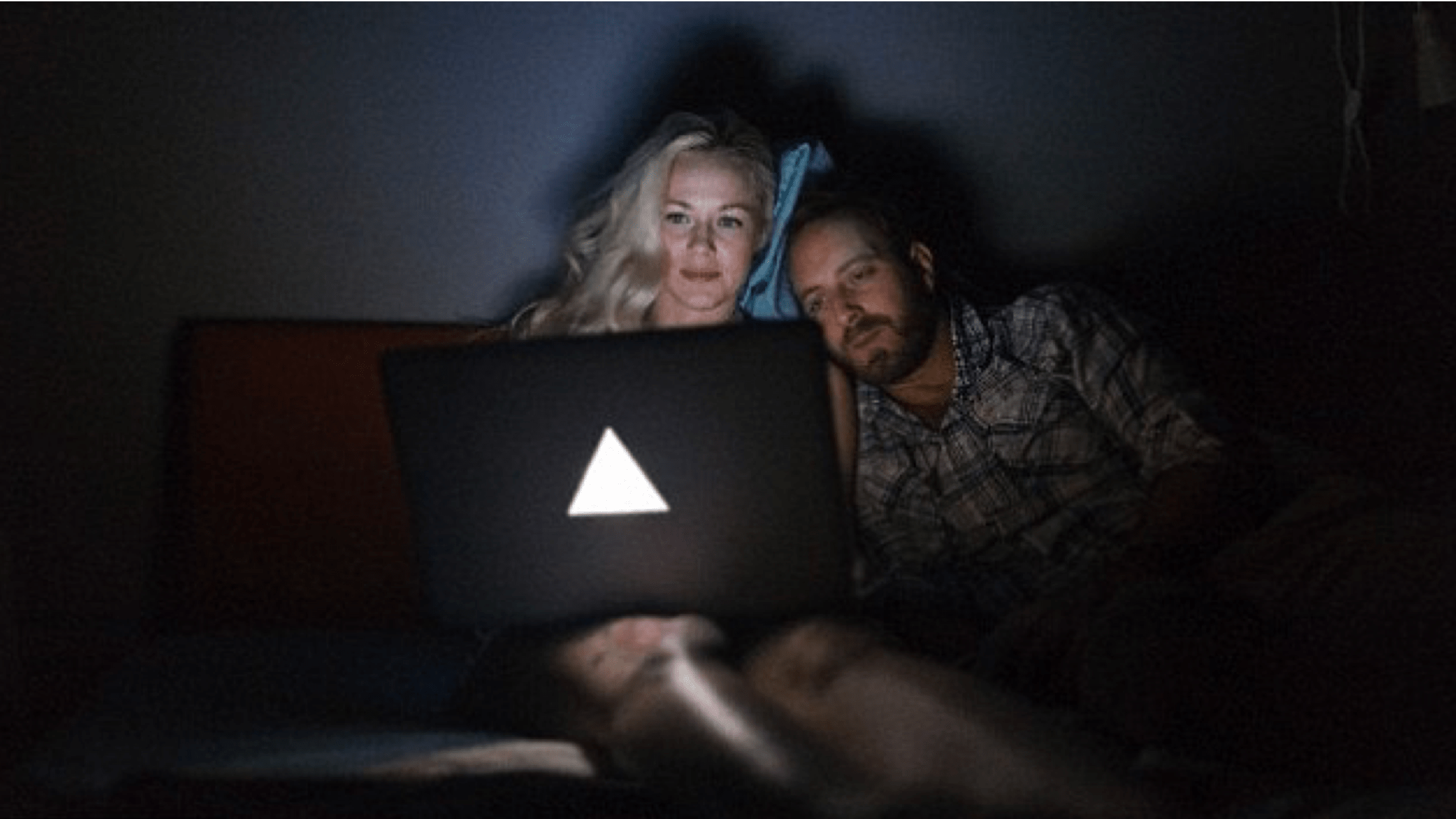 In addition, the days have become longer with ever longer working hours and screens right up to the bed, and the time given over to sleeping is becoming less and less. However, the recommendation remains the same for scientists in adulthood: the recommended sleeping time is between 7 and 9 hours.

In my opinion, there is a social dimension that tends to make sleep has-been, as if it were no longer a necessity but a waste of time. If you want to know more about my research on this subject I let you read the article I wrote on my Medium profile.

I decided to focus my research on people who had difficulty falling asleep. Indeed, falling asleep in front of the screens increases more and more but it slows down the production of melatonin, a hormone that regulates the sleep-wake cycle. Yet for people with sleep disorders, visual or auditory stimuli, such as watching a series or listening to music, are important. They prevent them from resuming their day or thinking about too many things that interfere with their sleep.

I then spoke with Sylvianne Pilette, a specialist in stress and emotion management. Many of these patients suffer from sleep disorders and stress, which is why her help was invaluable to me. She says that many of them reshape their day or think about their work day the next day, which generates stress when they fall asleep.

• Create an experience that is different every night to prevent boredom

• Trying to get the user to "leave the day behind"

I work on the product thinking, the experience (ergonomy, link the app to the tangible object), the industrial part (conception of the object, which feature), the application and the animations (how to convert data into animations).

The final solution is a generative animated video experience projected using an object placed on the bedside table. The object is connected to an app that recovers the data of the past day from the user's phone. When the user goes to bed, he places his phone on the object that recovers the data and switches his phone to aircraft mode and does not disturb to start the animation.

The animations vary according to the data retrieved, if the user has sent a lot of e-mails or has walked a lot he will be able to see it on the animations. The animations are abstract and will stimulate it visually accompanied by a relaxing sound atmosphere.

The animations will help to regulate the user's breathing rhythm to 6 breaths per minute to help them fall asleep. The next day he will be able to find the report of the previous day's animations and their meaning if he wants more details about the day before.

Following the interview with the sleep specialist, I interviewed 8 people who suffered from sleep disorders between the ages of 19 and 47. From these interviews I asked them to tell me what they did before they went to sleep and why they did it. And what methods help them to fall asleep better.

Many of them watched TV shows or listened to music to think about other things to be stimulated while falling asleep. Some listened to ASMR or nature sounds to be soothed and some meditated at times.

I then looked at the object, it must have been a discreet companion that remained on the user's bedside table. Indeed, some people left their phones on during the night, which disturbed their sleep a lot when they received notifications. 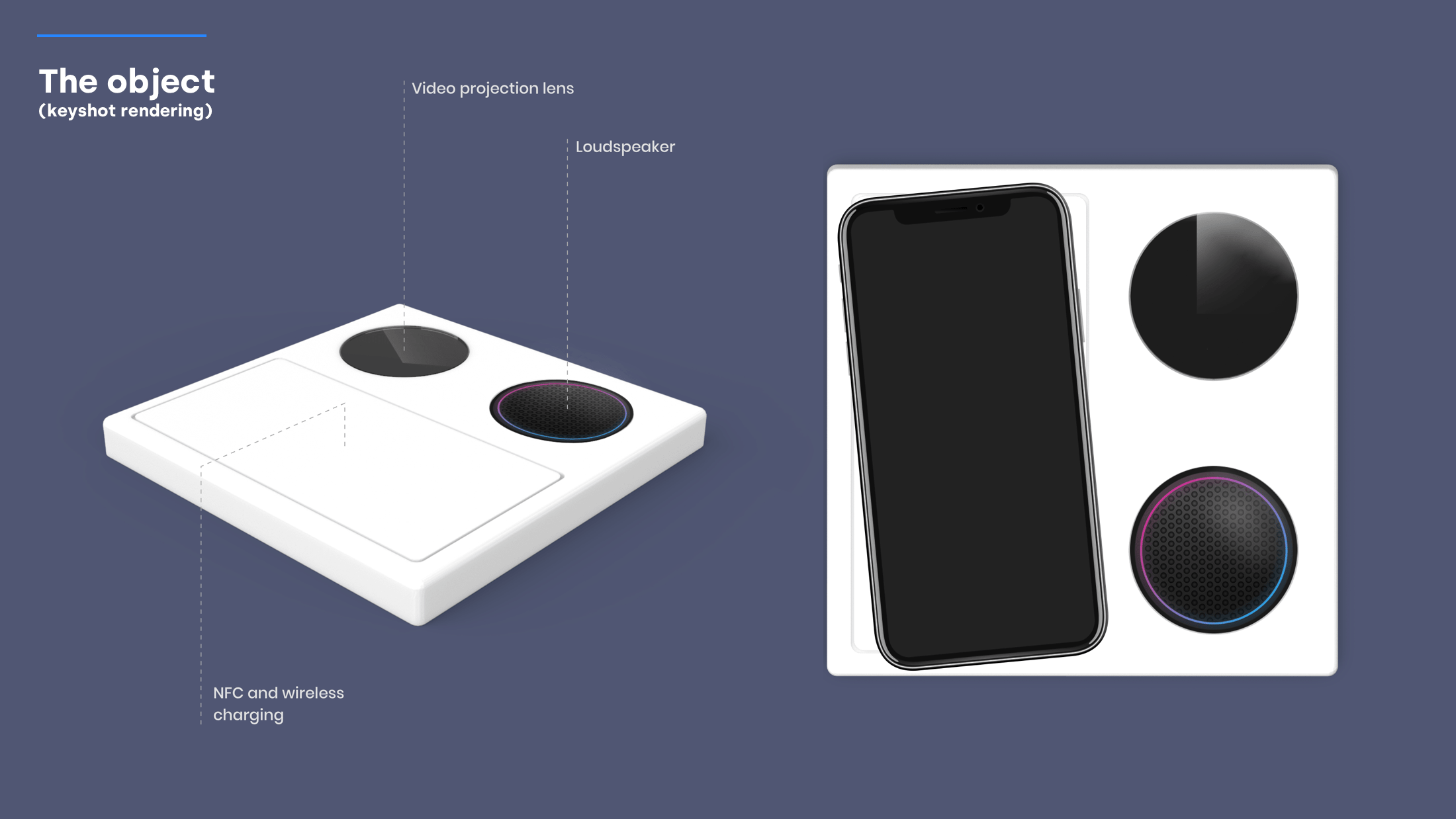 So I thought of a "small tablet" with a video projector and a small built-in speaker capable of holding and charging the phone. Once put down the data is transferred to the object and the phone switches to aircraft and do not disturb mode.

I started by thinking about the functions of the application, what is it for? On the one hand, it will allow you to collect data from the user's phone, which can be numerous: screen time, number of steps, time spent in transport, number of messages sent, number of e-mails received, etc... All these data will be transformed into abstract animations, which is why, in order for the user to be fully aware of the day's progress, the application had to provide a report the next day. 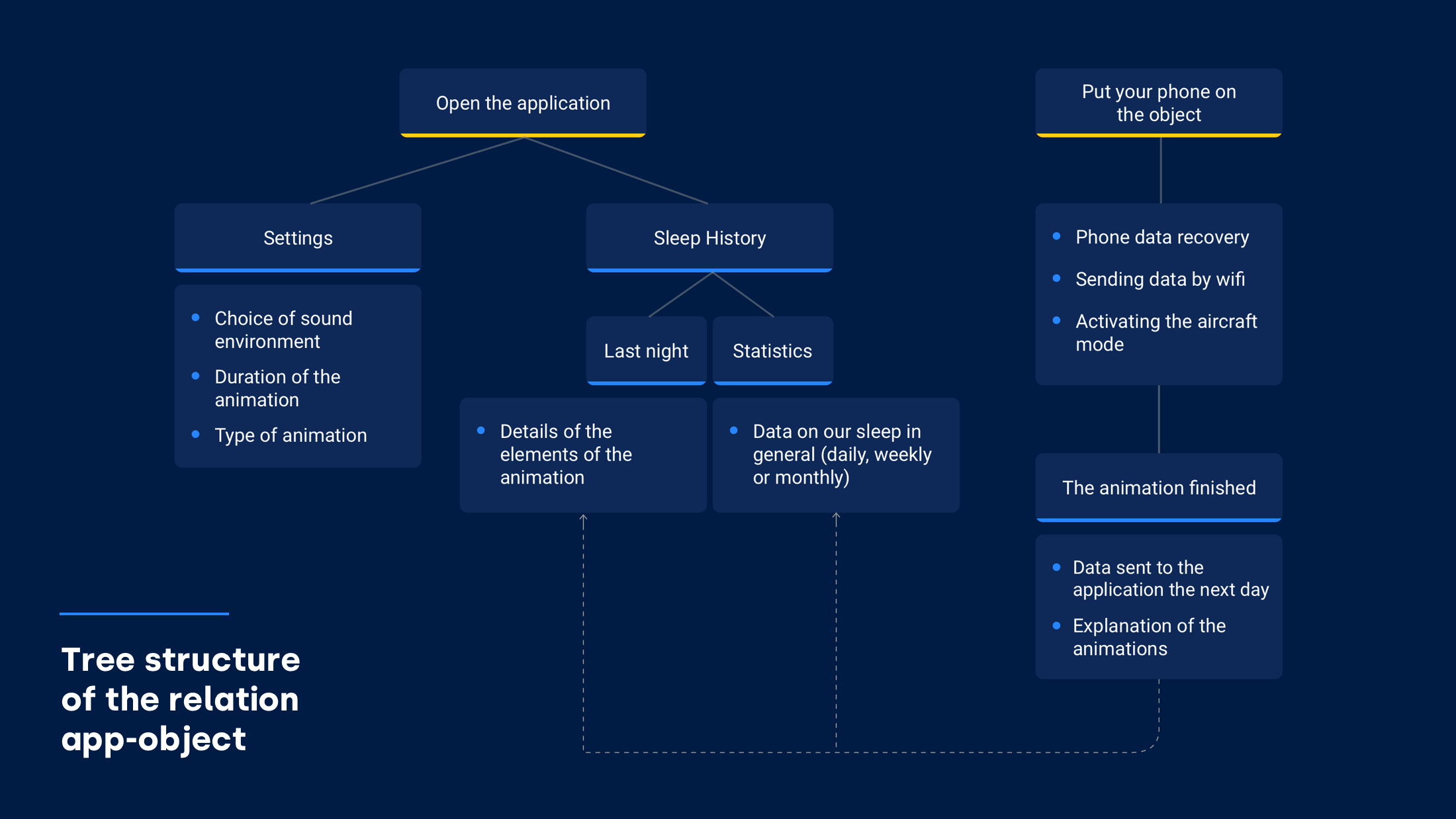 It is not intended to give the user instructions "send fewer e-mails, you spend too much time on your phone" but only to indicate to him so that he becomes aware of it by himself "yesterday your screen time was two hours longer than on Tuesday". 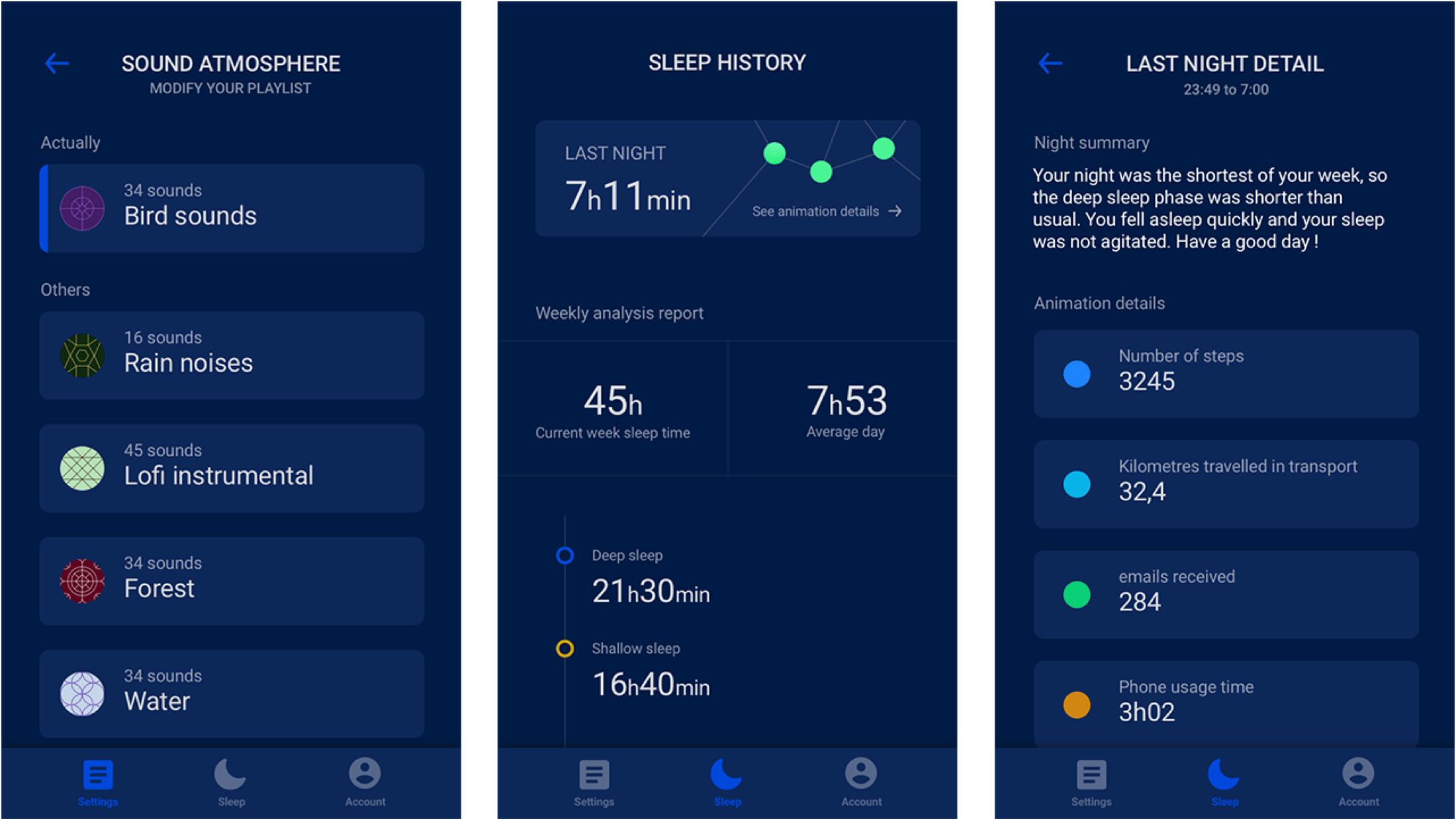 As a result of this awareness, he can then decide to pay attention to certain aspects of his day to avoid that it causes him more sleep problems. Because we know that the user's day has a strong influence on the time it takes him to fall asleep.

The animations vary according to the data retrieved, if the user has sent a lot of e-mails or has walked a lot he will be able to see it on the animations. The animations are abstract and will stimulate it visually accompanied by a relaxing sound atmosphere. 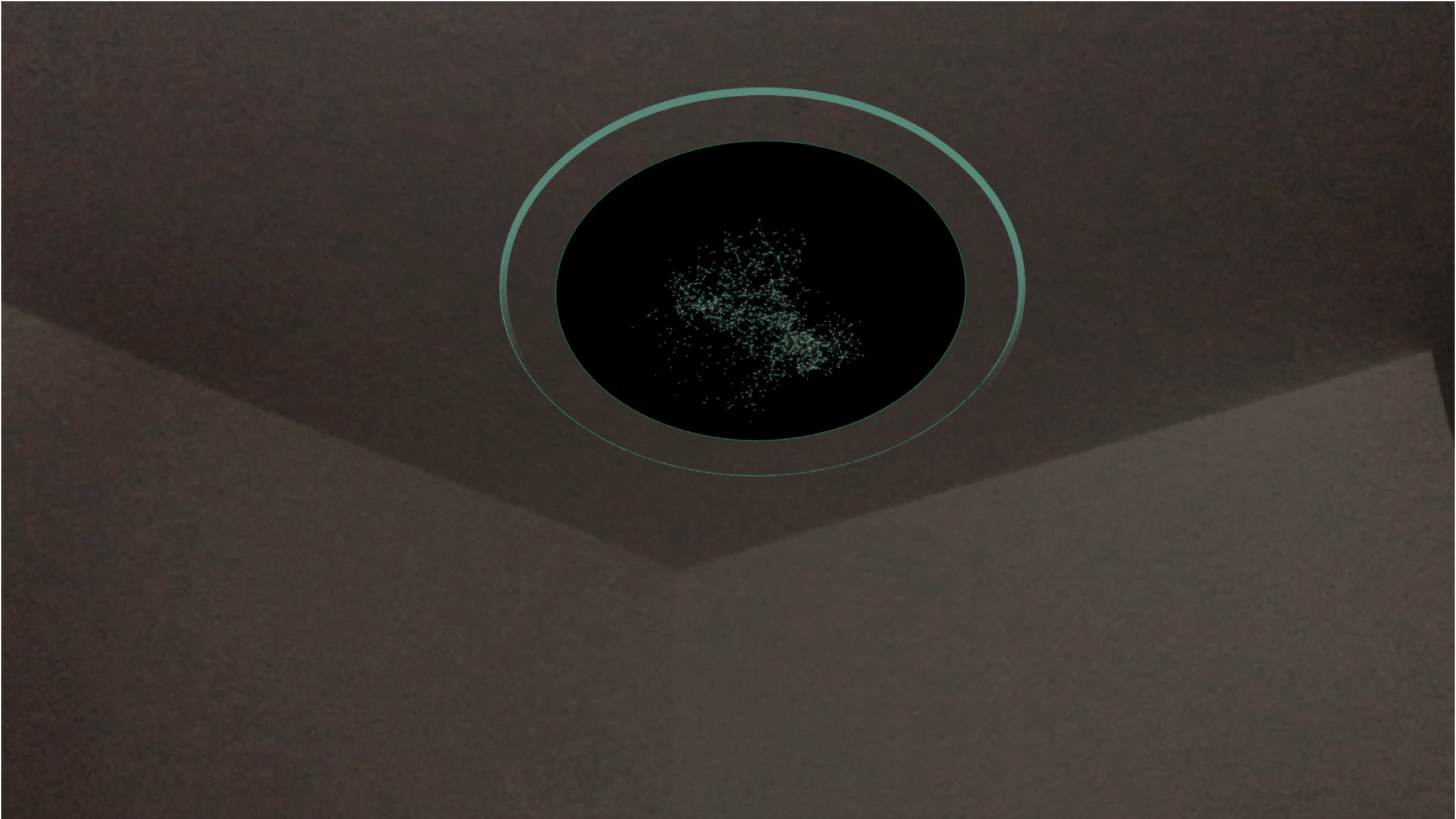 Not having the possibility to develop the object and therefore to ask my 8 interviewees to become real users, I had to function differently. I went to their home where they sleep every night at the end of the day and I projected different animations with sound to find out which ones soothed them the most in order to simulate the experience as well as possible. This allowed me to confirm my choices and adapt the final details. 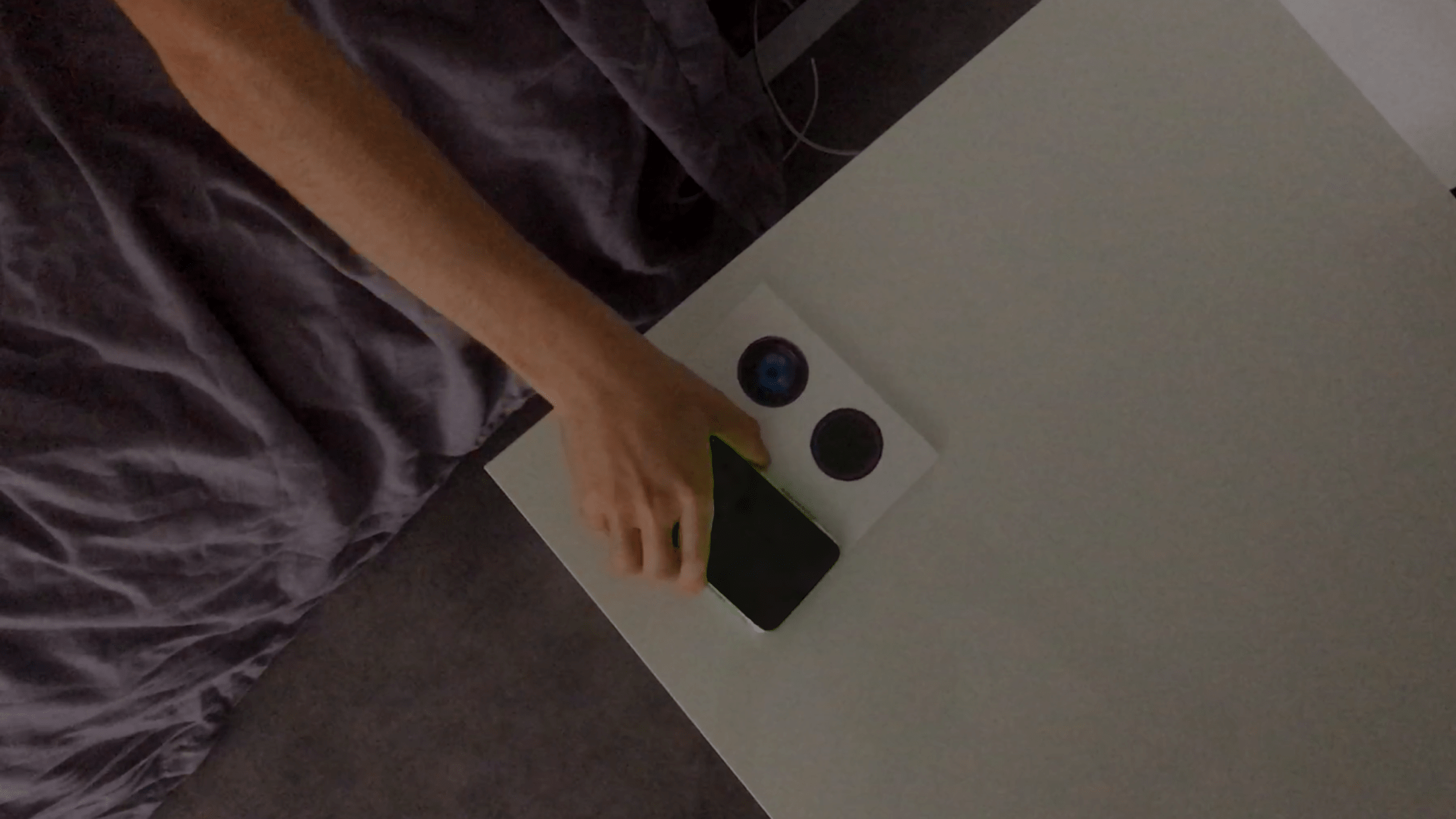 This project allowed me to explore a little more design as well as industrial design with reflection around an object. I worked alone on an issue that I did not master, which is an enriching process. Moreover, the relationship between a connected object and an application is more and more frequent and an interesting subject to explore.

The solution provided is one of the many possible proposals to bring to this problem of sleep, as everyone's behaviour is very different. This project was well received by the jury and I think it is a successful project.

To push the project a little further I would have liked to be able to design the object to allow me to have it tested by users for a longer period and have more valuable feedback.

However, it is interesting to ask ourselves if we want to immerse ourselves in data before going to sleep, we are overwhelmed by it every day and it could probably put off some users. I also don't know if abstract animations will be interpreted and understood in the same way by everyone, so more work needs to be done on this point.